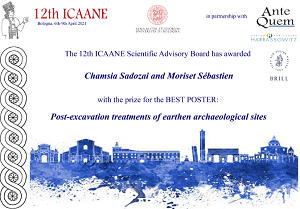 Résumé du poster "Post-excavation treatments of earthen archaeological sites"
This poster aims to propose practical tools for archaeologists who have to preserve earthen architecture remains in an archaeological context. The initial lifecycle of the architecture is depicted into four major phases: when in use, then the decline, the remains’ stabilisation by the erosion and finally the archaeological excavations. In the past, most of the sites were abandoned after this initial step and the erosion process was reactivated. Nowadays, heritage legislations and a general international awareness of the scientific community do not allow such a careless behaviour. Conservation of earthen archaeological remains has become a duty usually entrusted to archaeologists who have very little knowledge of the good practices. This poster presents easy reproducible conservation options based on three approaches: - preventive conservation, where the concept of “minimum interventions for maximum understanding” is applied - the conserva-tion dedicated to the site presentation to the public, with an anticipation of the damages as well as the construction of pedagogical tools on site (museum, pathways, facilities, signage...) - a mixed approach which combines elements from the first with elements of the second as part of a step-by-step conservation plan. This analysis is the result of 40 years experience on earthen ar-chaeological sites by the CRAterre laboratory experts, accumulating knowledge on theoretical and practical aspects of the conservation of earthen archaeological remains all over the world.
.
?? Plus d'informations : https://eventi.unibo.it/12icaane/prizes
????Consulter le carnet de résumés du congrès : https://eventi.unibo.it/12icaane